The History of Spindletop Hall 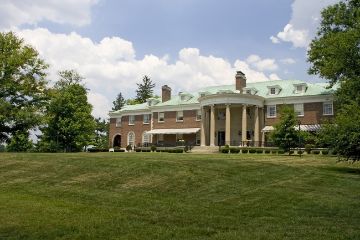 On November 13, 1925, Miles Frank Yount struck oil at Spindletop field in Beaumont, Texas. The field, which had been dormant since the early 1900’s, produced over 340,000 barrels of oil an acre per year, pumping in excess of 50 million barrels within 5 years. Now financially secure, Miles Frank and wife Pansy established a stable of American Saddlebred horses, quickly becoming recognized as leaders in the industry. On November 13, 1933, the eighth anniversary of Spindletop’s second discovery, Miles Frank Yount died of a heart attack at age 53. Left as the beneficiary of great wealth, Mildred (Pansy) Yount chose Kentucky as the place she would start anew. Spindletop Farm was established in 1935 on 800 acres of land. At a cost of one million dollars, construction of Spindletop Hall began in 1935 and took two years to complete. Mrs. Yount deemed the house to be a showplace of Kentucky, a modern mansion of classical architecture. When completed, the mansion housed 40 rooms, each with its own thermostat, 14 bathrooms, 133 full size exterior and interior doors, 102 windows with screens of copper, and 11 fireplaces. There are over 45,000 square feet of floor space. At the time of construction, the circular staircase and the 30 x 60 foot living room were the largest in Kentucky. Eventually, Mrs. Yount expanded the farm to 1,066 acres. On the property were seven miles of metal fences, 17 houses for servants and farm hands, and 18 barns. There was also a greenhouse, a swimming pool, a bath house, a tennis court, two aviaries, and three kennels. Pansy Yount lived at Spindletop with her adopted daughter, also named Mildred, and third husband and horse trainer Cape Grant. She was considered "new money" by the Kentucky Blue Bloods and was never accepted into their social circle. After divorcing Mr. Grant, Pansy left Spindletop in 1955. In early 1959, Spindletop Farm was sold to The University of Kentucky for $850,000. The farm was self-financed by Pansy over a period of ten years with no interest charged to the University. Mrs. Yount died in 1962 and in that same year Spindletop Hall became the residence of the University of Kentucky Faculty, Staff, and Alumni Club. The Club’s roster boasts over 1000 family, couple, senior, and individual members. We welcome new Members and invite all members to come to their Club for any of the numerous activities we have planned for their enjoyment.

Membership information is available in the lobby or can be requested here on the website. The Club at UK’s Spindletop Hall publishes a bi-monthly newsletter to provide members with information regarding all Club functions and special events. An Annual Calendar of Events is produced at the beginning of each year and a Summer Outdoor Activities Guide is mailed to the membership in early spring. The Outdoor Activities Guide details all of our summer programs and functions including information about swimming, tennis, golf practice facilities, and more.

Memberships Available to University of Kentucky Faculty, Staff, Alumni and Associate Members of the UK Alumni Association. Alumni Status is NOT required to join. Club Memberships Subject to Approval.